I know you all are probably thinking the same thing that I am thinking- that the only way to make this pandemic even more awesome is to combine it with a low-level mass toxin-related casualty event.  Well, my friends, your prayers have been heard and answered!   What is Hot IN ToxIN is chloroquine and hydroxychloroquine.  Endorsed by some desperate, overly optimistic (but perhaps well-intended?) individuals, it is already causing poisoning and death in the U.S. and abroad.

As our esteemed alumni, Jerry Snow, would say, these are each “dirty filthy pirates of a drug”, and that is putting it kindly.  They don’t have so much of a’ therapeutic window’ as much as a slim therapeutic peephole.

Per Micromedex: “Patients may deteriorate and die within 1 to 2 hours of a large ingestion, usually due to myocardial depression and dysrhythmias.”

It is probably the prolonged QT that will kill most people, but hypotension and coma will also do the trick.  The estimated fatal dose is 30-50 mg/kg (just over 2 grams) in an adult, and for children, this easily falls into the “one pill can kill” category.  But, in addition to being just straight up lethal in relatively small doses, it can present in a myriad of other ways.  As our local neurologist/toxicologist would say, “it does weird neuro stuff” (thanks for the edits, Laura Tormoehlen!).  Mary Wermuth elaborated at bit more by noting I left out the following:  dystonias, myopathy, myasthenia like syndrome, and psychosis in children.  She was also kind enough to note my omission of profound hypokalemia (from efflux blockade and intracellular shift, and you may see rebound hyperkalemia as toxicity improves), hemolytic anemia, and methemoglobinemia.  Oh, and did I mention that an incredible number of drugs will compete for metabolism at p450 enzymes causing toxic levels at therapeutic dosing?  Or that about a million other drugs can potentiate the prolonged QT (I’m looking at you, azithromycin!)?? It will also call your mother a nasty name. 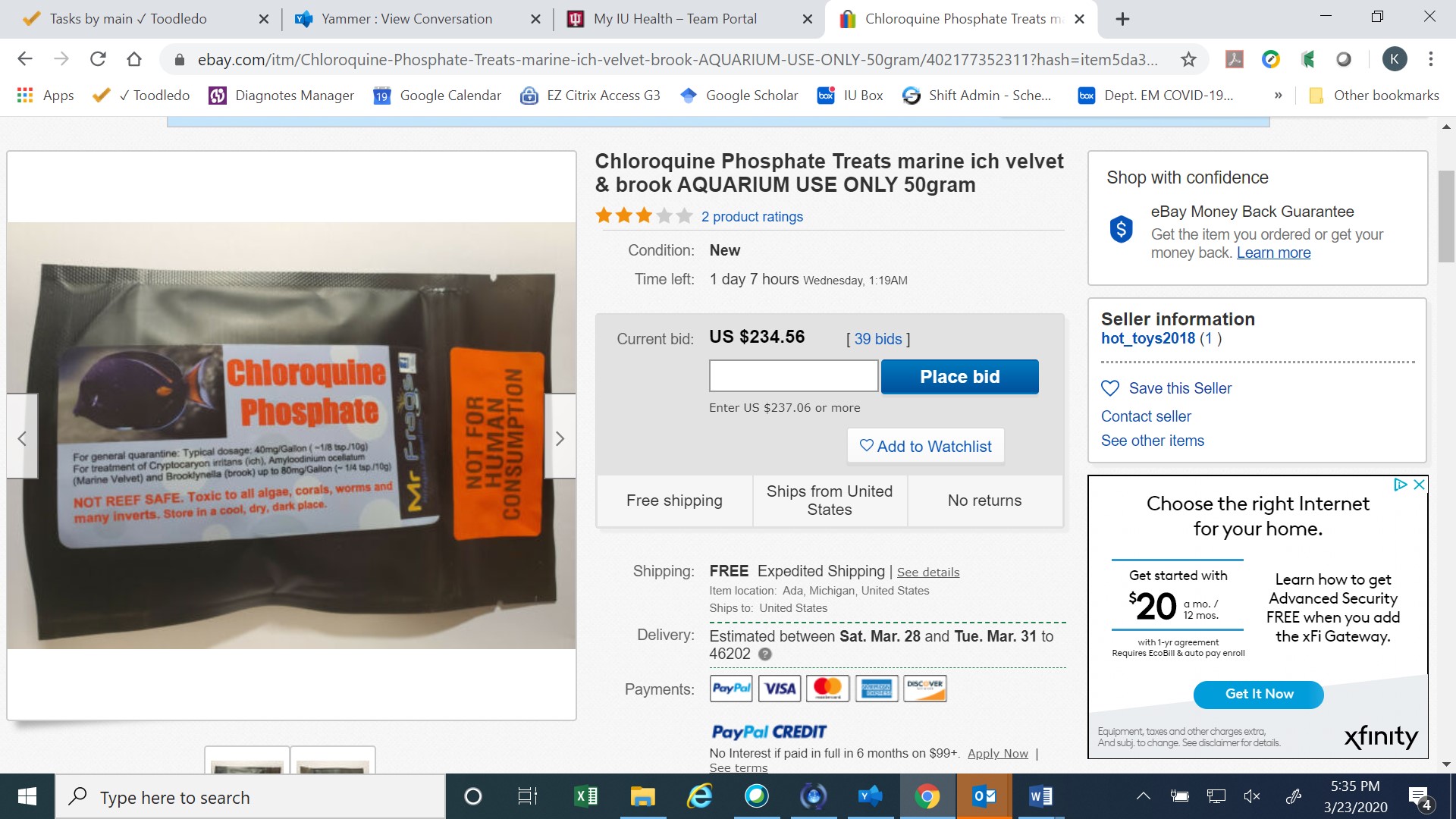 So, if a desperate person, realizing that all pharmacies are out of stock of both drugs (due to physicians preemptively ordering them for prophylaxis for themselves and family members), goes to creative means to find them, they might look to EBay.

It reminds me of a Shakespearean tragedy- specifically the minute Romeo believes the worst-case scenario has happened, and before doing his due diligence, offs himself with aquarium formulation chloroquine just before Juliet wakes from her drug induced coma.  Not many drugs can make COVID-19 look actually attractive in comparison!

In summary, this is not a drug to be used by amateurs.  And although I will include the Indiana Poison Center’s guideline for treatment of toxicity in this email, treating toxicity of these drugs is also best left to the pros.  This is one exposure that gives toxicologists street cred – right up there with strychnine and Novichok agents.  The treatment is as scary as the disease- 2 mg/kg of diazepam was just too frightening to write! So, for the one time I treated hydroxychloroquine poisoning (see above for bragging rights), I gave it slowly- 100 mg at a time. It perked my patient right up, but not all are so lucky.  There has been a death in the US already secondary to toxicity.  Please avail yourself early for help from your poison center with any exposures- 1-800-222-1222.