The first Hot Thing IN Tox is a study looking at drugs of abuse in the community.  Dear Friends working at Methodist– please call the poison center (317-962-2323) for those individuals who you suspect are intoxicated with an illicit substance.  It doesn’t matter if the patient is admitted or discharged.  If you don’t have time to call, send me an email with the patient’s MRN (include phrase “secure message” in the subject line).  The end goal of the study is to identify what crazy things people are taking these days- via a novel detection method.  Of course, if you wouldn’t mind hearing a bit of advice as to how to manage the patient, we are happy to help, as always.

Some people have asked me what happened to the brodifacoum in synthetic cannabinoids and why it isn’t so Hot in ToxIN anymore. To refresh your memory-last spring, a large quantity of synthetic cannabinoids contaminated with a potent anticoagulant was sold in our region. Overall, around 350 patients in total were identified, and there were 8 known deaths. The identification of new cases trickled off in October of 2018, and it appears that the epidemic has resolved. There is good reason to believe that it will happen again, however, so it is worth a retelling of this story. 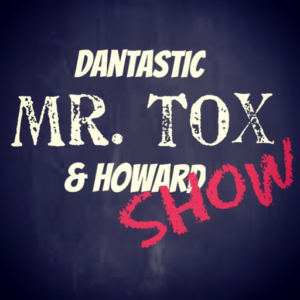 In March of 2018, two cases of severe coagulopathy were reported to the Illinois Poison Center.  The staff working there were reminded of the patients that ingested brodifacoum rat poison in years past.  What was interesting is that brodifacoum rat bait was significantly restricted for sale in 2011, and therefore exposures have become very uncommon.  Shortly after the first two cases, two more

were reported- and even in the heyday of brodifacoum rat poison a decade or two ago, this is a very unusual number of cases in a short period of time.  The fourth case admitted use of synthetic cannabinoid, and further investigation revealed that the initial three also used spice.  If you would like to hear about this initial period of discovery, I recommend my favorite podcast- The Dantastic Mr. Tox & Howard Show.  https://player.fm/series/the-dantastic-mr-tox-howard/the-bloody-mess

The Illinois Poison Center then contacted surrounding poison centers, and Dan Rusyniak (aka the Dantastic Mr. Tox) thought it a good idea to share the news to the EM listserv and alumni list serve. As he was walking out of the office for the day, he was stopped by someone working in fast track who had read the email earlier, saw a patient with hematuria and checked an INR which was quite high. This was Indiana’s first case. I am going to guess that most of us are not routinely checking INRs for hematuria when not on a blood thinner all the time- or honestly, ever- therefore this was a day that the stars perfectly aligned and the patient was able to be helped before a worse catastrophe befell her. 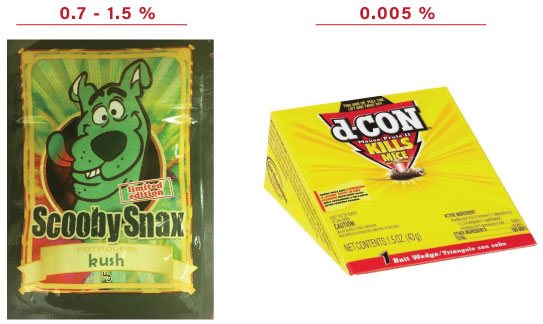 Initially it was mysterious how a person could consume enough brodifacoum through smoking spice- the amount didn’t seem like it would be enough to produce toxicity.   Historically, when the brodifacoum rat bait was ingested, adults had to eat most of a box to get coagulopathic.  As it turns out, the concentrations of brodifacoum in the spice is hundreds of times what it is in rat bait. Therefore, it is logical that a decent amount could enter the body this way, especially considering that many affected patients smoked several times a day, every day.

There was a case series published by one of the hospitals in Peoria that saw 34 patients from this outbreak. They found that the most common bleeding complication was hematuria, though GI bleeding, vaginal bleeding and bruising/mucosal bleeding were also seen.  https://www.nejm.org/doi/full/10.1056/NEJMoa1807652 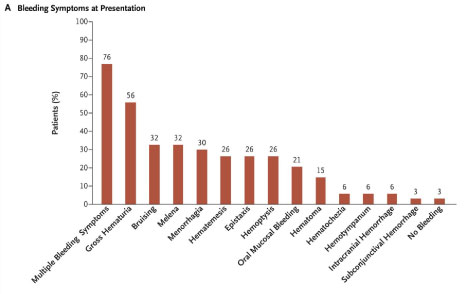 One of the most notable plot twists was when a patient presented with prolonged bleeding from the site where he had donated plasma.  This is a terrifying thought- that the plasma donated was used to make FFP, which is used to reverse coagulopathy, but the plasma does not have any functional factors if the person was exposed to enough brodifacoum, then the FFP is useless but no one would know that ahead of time.  Each unit of FFP comes from a single donor.  There were only 4 known cases that admitted to donating plasma, but the true number obviously cannot be quantified.

A significant challenge presented itself early in the outbreak.  The cost of treatment proved to be astronomical.  Patients with brodifacoum remain coagulopathic for months, up to and exceeding a year in some cases.  The amount of vitamin K needed to treat a single patient can be 50 mg three times a day.  The cost of oral vitamin K at the start of the epidemic was $14.10/mg. The IV formula was $5.29/mg, which can be administered orally.  The cost of treating a single patient could range between $15,000-30,000 per month just for the vitamin K- not including any hospitalization or medical care.

Eventually the main source of the contaminated spice came from a King Mini Mart in south Chicago.  2 grams of spice containing brodifacoum were found on the premises, and the owner had three more grams plus $280,000 in cash in a grocery bag at home.  The store sold 50-80 packages per day, at $10 to $20 each. As it turns out, this is not the first time brodifacoum has been mixed with a drug of abuse.

The main question is why- why do people do that?  There are a lot of possible reasons.  CYP2C9 enzymes are probably the main route of metabolism for cannabinoids, and have been shown to be inhibited by coumarin molecules. There is a good chance that brodifacoum would inhibit the metabolism of some synthetic cannabinoids.  There is not enough known about the metabolism of synthetic cannabinoids to know if all of them proceed down the same metabolic pathways or not, but this fact is probably not a deterrent for adventurous drug manufacturers/purveyors.

I find the prospect that brodifacoum was added to enhance the high the most likely reason that it was added, but there are other theories:

Unfortunately, many drugs of abuse have been known to be contaminated with other substances- not just this particular combination.  Long gone are days when heroin was just heroin, and cocaine was pure cocaine.  This leaves providers in a difficult position – not knowing what effects could be expected after exposure, as patients are not likely to have any knowledge of what they are buying/taking.  My only advice is to think broadly when a patient’s symptoms don’t match the exposure and have a low threshold for further testing.