Who misses Tox Tuesdays?  I know I do! For those of you who are not aware, Dan Rusyniak has left the Indiana Poison Center and now works for the state of Indiana with Jen Walthall in the Family and Social Services Administration. I miss him and his weekly tox tips, therefore I am resuscitating the Tox Tuesday email.  As we are under new management, there will also be a re-branding.  So. . .

Welcome to “What’s Hot IN ToxIN”- fresh off the press news from the world (mostly in Indiana) of toxicology as it happens (i.e. not necessarily always on Tuesdays).  I will be assisted by a small but mighty editorial staff consisting of our current MedTox Fellow, Bob Avera, and the Indiana Poison Center managing director, Adam Overberg, along with some guest authors.  Some of you will have noticed I didn’t say Jim Mowry- he retired from the managing director job earlier this year.  Many changes have occurred in the IUEM Med Tox division, but never to fear.  We will keep delivering moderately interesting, fairly timely, but always nerdy commentary on current toxic events.

The first Hot Thing IN Tox is a new study looking at drugs of abuse in the community.  Dear Friends working at Methodist– please call the poison center for those individuals who you suspect are intoxicated with an illicit substance.  It doesn’t matter if the patient is admitted or discharged.  If you don’t have time to call, send me an email with the patient’s MRN (include phrase “secure message” in the subject line).  The end goal of the study is to identify what crazy things people are taking these days- via a novel detection method.  Of course, if you wouldn’t mind hearing a bit of advice as to how to manage the patient, we are happy to help, as always.

What else is Hot IN Tox? Its spring, and many people are foraging for mushrooms.  Some of those pictured below can sell for $40/lb.  Considered a delicacy, but too expensive for most of us.  So if one can find them in the wild, one could see the temptation to make a meal of it.  But this reminds me of an old saying “There are bold mushroom hunters, there are old mushroom hunters, but there are no old, bold mushroom hunters”.  Be careful out there!  I’d like to thank my co-author, Alayna Prest- who helped research and write this entry for you.

What clinical symptoms would be expected after eating a meal made with the pictured foraged mushrooms:

Gyromitra esculenta are reddish-brown non-gilled fungi with a convoluted surface. I remember that they look like a brain in some ways, kind of shrivelled and roundish, so that reminds me of one of the main manifestations of poisoning- seizures.  Other symptoms of gyromitrin toxicity include vomiting, abdominal pain, myalgias, liver damage and rhabdomyolysis. Nausea, vomiting, or diarrhea often occur within five to 48 hours after ingestion.1-4 Remember that after consuming a mushroom, early vomiting (in the first few hours) is a good sign in a way- they are likely to cause gastritis and nothing else (although there is one exception to this rule, luckily not from a mushroom native to Indiana).  Gyromitrin is metabolized to monomethyl-hydrazine (MMH) which produces toxicity analogous to isoniazid overdose by impeding gamma amino butyric acid (GABA) formation in the brain.  MMH inhibits pyridoxine phosphokinase, which prevents the active form of vitamin B6 (pyridoxal phosphate) from being produced, and inhibits glutamic acid decarboxylase (GAD), which is responsible for converting glutamate to GABA.2,4

Long story short, GABA depletion leads to seizures that can be refractory to benzo-diazepine therapy. Pyridoxine is therefore a recommended therapy in addition to phenobarbital for seizures from Gyromitra . 1-5 Dosing of pyridoxine in gyromitrin poisoning is not well established but an accepted dosing strategy is 70 mg/kg intravenously up to 5 gm, repeated once, 1 although higher doses have been reported.1-5

Other effects of Gyromitra poisoning may include hepatic failure, usually occurring about 48 hours after ingestion, potentially related to lipid peroxidation related to additional hydrazine compounds. 2,3  Oxidation injury can also cause methemoglobinemia and hemolysis.3

The other answers refer to effects from other toxic mushrooms.1,4 Coprinopsis atramentaria is found in North America and typically grows from late spring to fall.  Its toxicity is a disulfiram syndrome (Tippler’s bane) which is characterized by facial flushing, vomiting, malaise, palpitations, paraesthesias, and agitation which can be noted within 10-20 min after ingestion of alcohol.  Psilocybin containing mushrooms, also known as magic mushrooms, are associated with hallucinations as the toxin is similar to LSD.  Inocybe and Clitocybe mushrooms contain muscarine, which is structurally similar to acetylcholine and may produce choninergic effects such as lacrimation, vomiting, diarrhea, bradycardia, bronchorrhea, bronchospasm, salivation, and miosis.

Gyromitra esculenta primarily grow in geographic locations of temperate coniferous forests typically found growing under the trees, and toxicity is reported to be variable depending on location.1 Although many foragers avoid Gyromitra esculenta while hunting, there is subset of individuals who specifically forage for this mushroom, considering it a delicacy.1,2 Careful preparation, including drying and parboiling, must be taken to decrease the possibility of toxicity.3,5

What clinical symptoms would be expected after eating a meal made with the pictured foraged mushrooms? 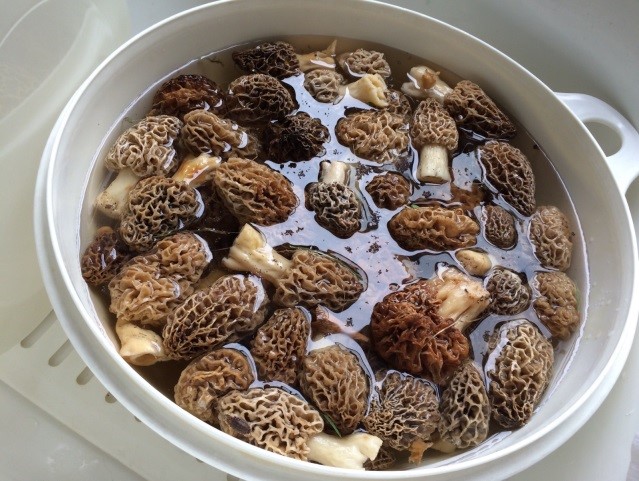 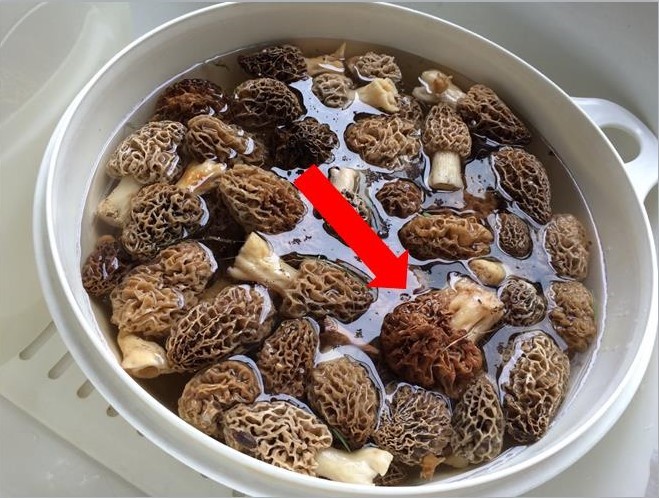